We decided to purchase a support package from a firm called Pure Mountains and this, like good travel insurance, proved it’s worth from the moment we arrived at Malaga Airport on Friday February 28th when Jenny from Pure Mountains was waiting for us and within a few minutes we were in her landrover with our bike bags secured in the trailer heading for our accommodation in a beautiful villa complex in the hills overlooking Malaga.

It was there we met some of the riders we would spend the next week with. There were two more cyclists like ourselves plus Pure Mountains’ Tim and his mate Gary from Vamos cycling. Unpacking the bikes in sunshine was a rare pleasure having left wet and miserable weather at home and it was great to see several bike work stands and a full cycle tool kit placed at our disposal not to mention the expertise of Tim for any mechanical problems. The next day we met with the last arrivals the two lads from England and we headed off to register for the race (a 90 min drive). Registration was chaotic but somehow in the gabble of rapidly spoken Spanish and the tangling of various queues we all managed to get our correct race plates. The front plate had one’s race number and surname on the front and a timing chip stuck on to the reverse side which was clever and avoided using wrist or ankle bands and having to return the chips at race end.

It was here at registration that the value of having a support package became evident when one of the English riders unpacked his bike to discover his carbon subframe had suffered irreparable damage to one of the main support arms most likely in transit. In effect his race (and that of his team mate!) was over even before he turned a wheel. This was 4.30pm on a Saturday afternoon in a leisure centre on the outskirts of a large town. Jenny from Pure Mountains got on her mobile and after several phone calls conducted in rapid Spanish sourced a replacement bike for our hapless rider. A full carbon Merida full sus for 35 euros a day which given the beating the bikes take over the race seemed very good value.

Sunday dawned frosty (we were staying in a spacious villa in the nearby hills) but bright and the dilemma of how much food/water/clothing to take was made easier by our decision to pay 70 euros for a “tech box” to be delivered at the mid way point in each of the following 6 day stages. It was good to know if the weather changed we could stop and get extra food/fluids and dry clothing. These boxes supplemented the official feed stops en route and we threw in such items as spare tyre/tubes/rear mech and tools as well as our extra food and clothing.

Race start was heralded by 800 riders all streaming off in a long line to the blast of music and the machine gun delivery of commentary from our Spanish hosts and as the fast guys pushed on the “peleton “ gradually lengthened to well over 1km as we negotiated the climb out of town towards the mountains. Derek and I had decided to “ start slowly and go steady” bearing in mind there were 6 days to go with some 10,000metres climbing ahead. After at least one hour of climbing we came across the first of the technical sections and it became a case of cyclocross as we shouldered the bikes and started climbing up very steep and narrow trail littered with rocks the size of a fist. I do know the elites rode up this section but the vast majority of riders were walking (and stumbling and falling!). The descents were amazing making Kilbroney seem like a walk in Lurgan Park with a mix of narrow fire roads with slippy hairpin bends and various skid marks disappearing into the undergrowth very commonly seen on the exit of the bends and narrow steep rocky descents. We made steady (i.e. slow ) progress and had one mechanical scare when following an off Derek’s rear mech cage split but somehow by nursing the bike we finished the stage at 6 hours (exactly twice the time the pros took!). Tired but pleased would sum up the day.

Despite being slow finishers Jenny from Pure Mountains was waiting patiently at the finish line ready to take us back to the accommodation the others having gone on before us. First job was clean and inpect the bikes (hoses brushes and workstands and tools were waiting for us). Jenny sourced a replacement rear mech for Derek from the shimano team tent at the finishline so it was shower time as soon as the bikes were sorted and a huge feed and off to bed early for a good rest before the second stage.

We awoke to rain and it set the scene for the day ahead. A 70 Km stage with another 1800m climbing, and it soon became clear as we started cycling out of the town into the local olive grove hillsides this was going to be one slippy muddy ride. The climb was tough going up to the snow line and the descents as steep as previous day but with the added hazard of slimy mud which with a clay base made traction very sketchy. Derek broke a chain on a steep climb and we repaired this and carried on. We both had a few tumbles and one in particular on a steep descent was one of those mud/sky/mud/sky/mud/long sky falls that left me winded and sore lying on my back like a stranded beetle! Thankfully the bike was undamaged even if the bars were pointing in the wrong direction. We carried on but the pain in my left lower back was too sore to sit for long so I rode the last 2 hours standing up which made the descents sketchy to say the least. We finished in 7 hours (again twice the time of the pros) covered completely in mud, soaked and very cold!

It was later that evening I realised I was in trouble barely able to walk, and puking into flowerbeds at our accommodation! A trip to the local (excellent) hospital confirmed bruising to the deep muscles overlying the kidney and I knew I was out of the race. Derek was more than generous with his support despite having his partner pull out at the end of the second stage and in effect our race was over. We knew he could continue on without me but the team would not be credited a finish but at least he would get to ride the remaining stages. Again thanks to our excellent support package the Spanish speaking Jenny smoothed the paperwork and provided transport and even went to the local pharmacy that evening to get my prescription dispensed. What a wonderful service!

Derek to his credit never complained and rode well over the remaining stages (in fact he was faster on his own!) and it was great to see him cross the final finish line on the Friday afternoon after a tough final day which included the usual relentless climbs and rocky technical descents and riding along a disused railway line for a very fast but bumpy one km section. The lads on hardtails really suffered on that section.

Whilst Derek was racing the remaining sections I had time to explore the race start/finish area looking at how the professional teams from Cannondale, Specialised , Giant and Trek all had large mobile workshops and endless supplies spare bikes, wheels and frames. I was surprised at the paucity of full sus bikes and it was evident the majority of the elite riders were on full carbon framed 29inch wheeled hardtails often with a single chainset and the SRAM 11 speed cassette. The debate in relation to the ideal wheel sizes will continue no doubt for some years and Derek and I felt very much in the minority in our 26inch wheel sized bikes.

So what did we learn from our experience. We now have a much better idea of the training requirements for multiday long distance off road events and were pleased our choice of kit and our bike preparations were adequate and we had avoided any retirements due to poor planning. It also goes to show that you cannot rule out the possibility of things going pear shaped and our decision to enlist the services of Pure Mountains as our support package was an inspired move and worth every penny!

Cycling Ulster would like to wish Fred a speedy recovery and to congratulate both riders on taking on such an epic race. 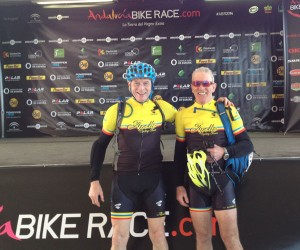 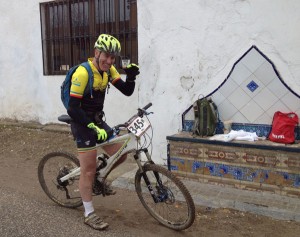 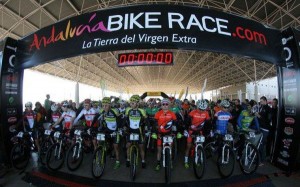 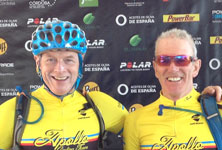