The excitement is palpable. The build up has begun.  The second biggest race in world cycling and one of the biggest across all sport is coming here in May.

Here in Northern Ireland there are only two words on every cyclists lips, Giro D’italia (or is that three?).  The non-cyclists don’t yet realise whats about to hit them, or the silly fat people as we call them behind their backs, but we do.

Obviously an elite few will only get to experience being in the pro peloton but we can dream and engineer alternative to suit ourselves, the human spirit will persevere in the form of a Gran Fondo to suit your ability.

Our friends at Chain Reaction Cycles in Belfast have organised a series of sportives the week before the big event and there is a LOT of chatter among our membership.  I wouldn’t be surprised if half the club are on this.  I would adise getting in early though as numbers are limited to 1000 I do believe. UP APOLLO.

Heres a link to the event FB page. 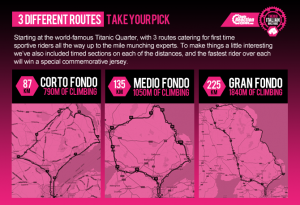