Prior to Apollo Cycle Team, there were two Local cycle clubs in Lurgan each with approximately 15 or so members, these being Clann Eireann and Lurgan Road Club. A proposal was made in 1995 to merge them so that a more cross community approach to cycling and racing could be made. With both these clubs already having their own success’ and community support the idea to merge was rejected. Not deterred by this,  a small group of cyclists namely Myles McCorry, Vincent McKenna, Marty Rogers, Andy Layhe and Kieran Martin decided to form a new club as had been previously proposed. At this point, the then Lurgan Road Club decided to keep the notion of merging with Apollo on the back burner. Apollo was first registered as a club in 1995 and the club jersey was first worn at the Newry 3 Day in 1996 by Myles McCorry. 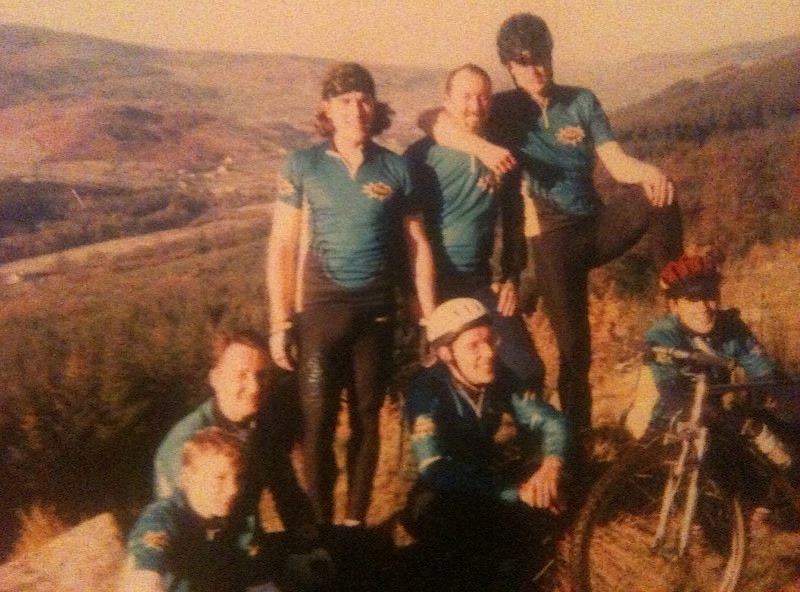 The name “Apollo” was chosen deliberately because of its lack of significance. In a country were symbolism and history can have a lasting negative consequence it was decided a name that had no actual meaning to us was the way to go, and so it was one night when Marty Rogers was on holiday in Australia he went to the cinema and watched the film Apollo 13 when he had a eureka moment, “Apollo” would be a great name for our cycling club. To the brave men of that doomed flight and Tom Hanks, we salute you.

Considering Apollo Cycle team was only formed in late 1995, and had its first competitive year in 1996. The club had worked hard to establish a name for themselves, which resulted in them being the first local club to host the Ulster MTB Championships in Lurgan park in the same year . 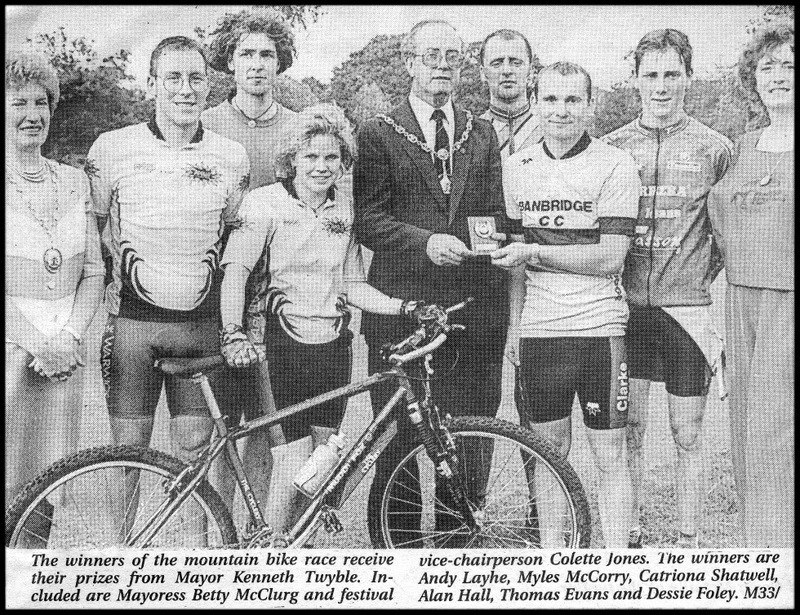 In 1997, in true Apollo tradition. The “Lake Jump” event was introduced to the MTB race day, giving competitors a chance to “Blast off” from a 1 meter ramp into the lake. Points were rewarded based on distance jumped, and acrobatic moves whilst in the air. The event was an attempt to bring some fun into the sport, and proved to be very successful. 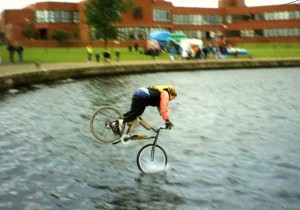 In 1997 the Irish Cycle Cross Championships was in danger of being cancelled, with this in mind Apollo with sponsorship from Silverwood Hotel, hosted the event in Craigavon Lakes (in the area that is now Lakelands and Lakeview Road). The following year the event was moved to Lurgan Park, this is where it remained until 2001 making Apollo the only club to host the Championships for 5 consecutive years.

Apollo has seen some of its riders rise to incredible heights throughout the years, with names such as David Gardiner, Myles McCrory, and Tony McConville to name but a few. In 1982 David Gardiner rode the 185 Km Individual Road Race in the commonwealth Games in Brisbane, Australia finishing in an impressive 8th place.  Myles McCrory took silver in the 1997 Donegal 3 day, and even raced in the 8 day international Rás Tailteann. Tony McConville secured a bronze in the 50 mile TT Irish National Cycling Championships, and also rode himself to a bronze medal in the 1998 McKinley 3 Day. This is just a glimpse of the success some of riders have achieved in Apollo’s short lived history, who knows what is to come next.

Over the years, changes have occurred with the club kit. In Sept 2013 a new club kit design was approved by the members.  The club wanted to show its heritage and so as Lurgan Road Club had originally rode in their team colour red and Apollo in blue, as a mark of respect and to represent the coming together of the two clubs in 2002, the red and blue of the two clubs was integrated into the new club logo. 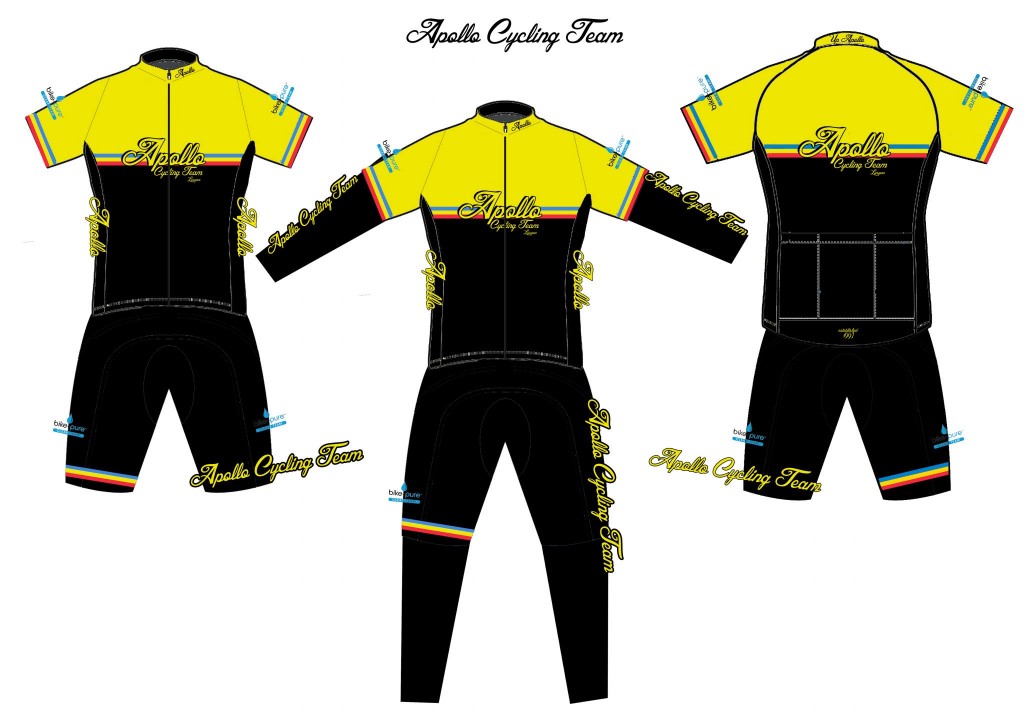 Another addition to the new club kit was the Bike Pure motif. Bike Pure was conceived by it’s co-founders Myles McCorry and Andy Layhe, both of whom were founders of the Apollo Cycle Team. Bike Pure is an independent not for profit organisation registered in Australia, promoting honest ethical cycle sport. Bike Pure has become an independent voice for honest, ethical cycling on a global scale, sending a powerful message that you don’t have to resort to taking illegal performance enhancing drugs to compete in cycle sport. The current elite male and female road race champions Rui Costa and Marianne Vos, have been members of Bike pure since its inception and as can be seen in the pictures below, wear their Bike Pure wrist band with pride.  As Apollo Cycling team is now a signatory member of its clean team program it too is proud to show this off in the new club kit. 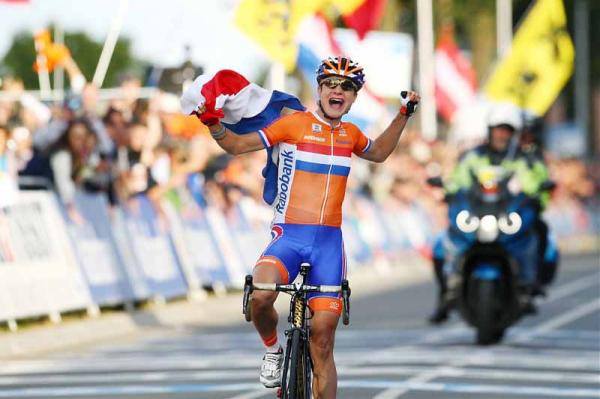 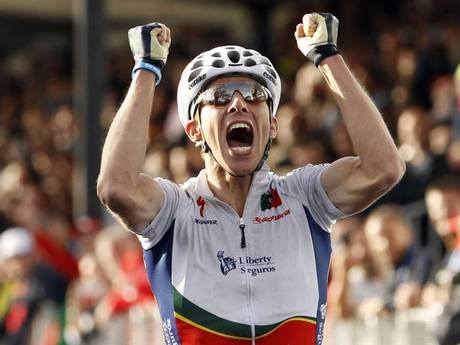 A testimony to the hard work put in by Apollo members is the show by the fact that Apollo is one of the few clubs that regularly holds races for all aspects of the cycling sport including Road race, MTB, Cycle X and Time Trial.

The latest step forward for the club was the acquisition of the Apollo Cycling Team Club Rooms, located on 42 High Street Lurgan, this gave the club a much needed presence in the town, So if you are in the area, why not pop in and see what we are all about… 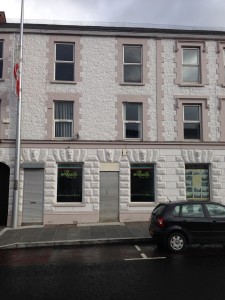 Our traditional battle cry can be heard at races and events all over Ireland, UP APOLLO.